On Sunday 3rd April, 2011, over 240 Life Guardians and their family members and friends left their various destinations to culminate at the Blanchisseuse start of what was to be the first in a series of nature adventures under the umbrella of our Guardian Gone Green banner. 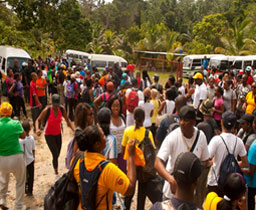 It was an opportunity to value and enjoy what nature had to offer, learn about the flora and fauna and end with an invigorating and refreshing bath at the Avocat/Marianne Falls. It was a hike that took us about an hour and a half and was not without the odd person slipping on the damp floor of the rain forest, trekking through knee high water without fear of what may be lurking beneath the water, crossing a ridge with water on either side; those with a phobia for heights would have found this a bit challenging. 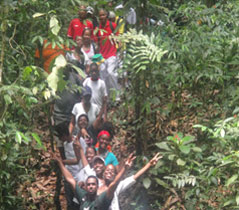 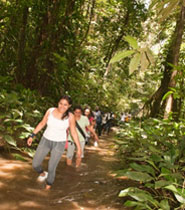 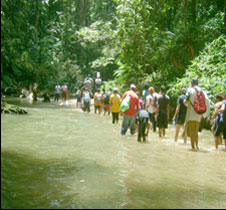 Everyone appreciated the clean air and even stopped to embrace and capture the picturesque moments and the beautiful scenery along the way in anticipation of the fantastic and refreshing bath at the waterfall. It was definitely a sight to see. 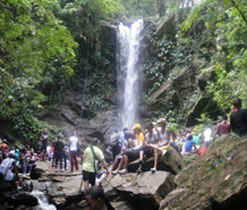 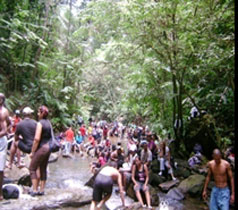 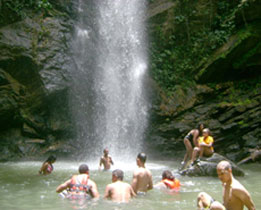 Our guides of the Hike Seekers Club ensured the safety of everyone for the duration of trip and on our return to civilization, all participants indulged in a delicious meal and took time to relax and enjoy the soothing ambiance of the countryside.
The leader of the Hike Seekers Club, Lawrence Pierre aka Snake went further to educate those who were brave enough to get close, on the various types of snakes, some of which he had in his possession, advising on which were poisonous and which weren’t. Life Guardians got a chance to hold the Boa Constrictor around their necks or to look at the Mappipi Balsan being milked of its poison which was then ingested by Mr. Pierre, (this is not to be tried by anyone without the expertise on snakes). The Mappipi Balsan is one of three only poisonous snakes that we have in Trinidad, the other being the Mappipi Zanana and the Coral snake.

Many people praised the success of the event and remarked on how entertaining and enjoyable they thought it was and some even requested another visit to the falls or another hike of a similar nature.

This was indeed a remarkable experience!!!!