The day that my friend and I were waiting for finally came and because we were partying the night before, we were rushing like two mad people, so we would reach on time at the meeting point and not be left back by the group of hikers on that Sunday morning. Thankfully for our culture of being late, we met up with our Hike leader Laurence “Snakeman” Pierre and the others hikers. We took off on our journey, which took us two hours to reach the point where we started the hike. 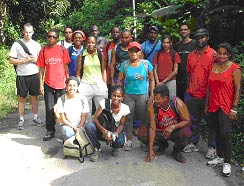 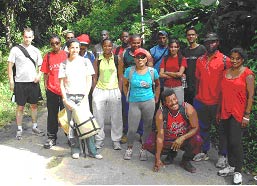 After securing our vehicles and taking a group shot, we set off to our destination, Rincon Falls. Our trek on Rincon road was in itself an experience. My friend Craig from England was amazed as we passed small wooden homes “in the middle of nowhere” where people could live such humble lives. You could not help but feel like an outsider as the few residents looked out at us while we walked on the trail. I am sure we were a familiar sight to them, as they live along the path of one of God’s beautiful creation in Trinidad.

After fifteen minutes of walking, we entered the forest. I felt like eve walking through the garden of Eden. The sound of the leaves blowing in the wind and the birds whistling were like music to my ears. While our hike leader Snakeman was cutting some of the bushes to clear the track for us to pass, we were talking and making jokes among ourselves. As a nature lover, I was enjoying the scenery and took mental photos of the trees and the breathtaking views we got of the mountains. The trees were very huge and their foliage were thick. There were a wide variety of trees and plants.

I occasionally had to look back to make sure my friend Craig was okay as this was his first hike.I liked hearing the sound of dry leaves crackling under my feet and the hundreds of insects all around, carrying on conversations in their own language. We came upon some cocoa trees with fruit and the guys helped themselves with a few cocoa. They even convinced my friend Craig to try it and when he did the expression on his face made me smile, I knew he had never tasted anything like that before.

About forty-five minutes after we began, the place was humid and I started to miss my bed. In the near distance I began to hear the sound of water, as we got closer I even began to smell it. Knowing that we were a short distance away from the falls gave us an energy boost to walk faster to reach the falls. 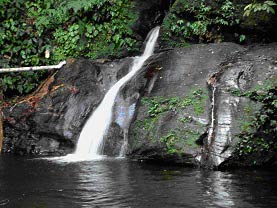 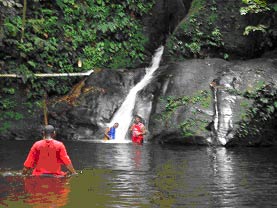 When we arrived at the waterfall our hike leader explained to us that this was Blackpool and not Rincon falls which would take us approximately ninety minutes more to reach. Blackpool, as the name implies looks like a hole that is carefully carved into the hills. The pool of water was inviting and our leader, Snakeman, was the first to get in the water, his facial expression spelt out joy and love for nature.

After about twenty minutes at the Blackpool we continued our hike to Rincon Falls. The walk to the falls lasted another hour and again just before we reached our final destination we heard the falling water cascading down the slippery rocks. As nature had one of her beautiful creations well protected and hidden we had to climb down a very steep hill with a rope, which for the less athletic was quite challenging. In the end however when you get out of the forest and into the clearing there she was, the Rincon Falls, absolutely breathtaking. 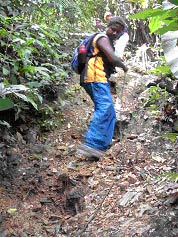 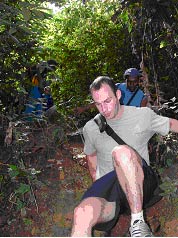 Every piece of rock, every shrub and the water flowing down the rocks was something I had never experienced. I had to stand back and admire the beauty of the falls which was about three hundred feet. I looked up to the heavens and smiled and felt that God was also smiling back at us for discovering one of his little treasures. 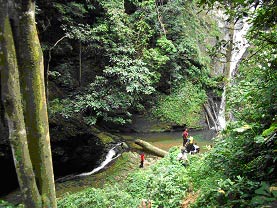 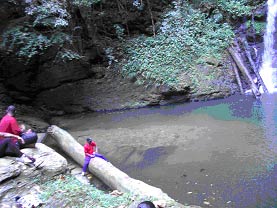 We swam, took massages under the water fall, ate and swam again. It was so beautiful that when it was time to go, I tried to take a last look around, so I will always remember the beauty of the falls. The rains came and it was a little struggle to hike out of the forest. However, we made it and the hike was over. 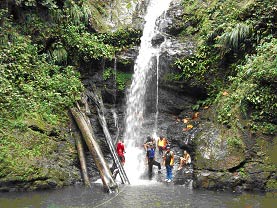 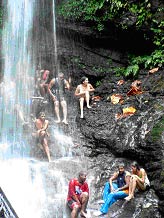 To complete the day, Craig and I decided to stop at Maracas Bay and continue having a day full of fun. The day turned out to be a good one for me. The hike to the falls, the lush green forest, force you to forget about the rat race in the concrete jungle which we live in and sometime stop and smell the roses. 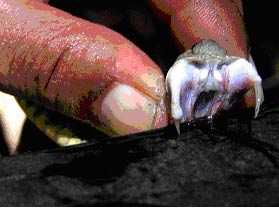 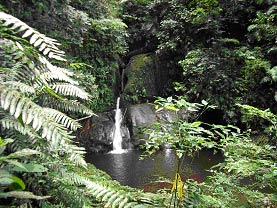 Come and join me next year on another hike.